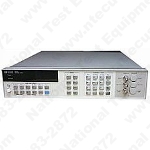 The 3245A Function Generator is a universal source that combines precision dc capabilities with versatile ac performance, including arbitrary waveform generation. This creates versatility on the bench, where the unit may be all the source you need. The unit can generate ac voltage outputs, including sine, triangle, and square waves, at frequencies up to 1MHz. Variable duty-cycle pulse and ramp outputs can be generated at up to 100kHz. Precision DC Precision dc outputs of both voltage and current. In the high-resolution mode, you get 24-bit resolution with 60-ppm, 90-day accuracy. The low-resolution mode provides 12-bit resolution with 100ms settling times. This type of precision means you can test A/D converters, Voltage to Frequency converters, VCO's, transducers, and other equipment needing highly-accurate dc voltage or current. There are two output ranges in the high-resolution mode: ±1 volt and ±10 volts. In the low-resolution mode, there are seven ranges. In current, there are four ranges of output, from 0.1mA to 100mA. Output impedance is selectable as either zero or O 50O. Accurate AC Generate ac voltage outputs, including sine, triangle, and square waves, at frequencies of up to 1MHz. Variable duty-cycle pulse and ramp outputs can be generated at up to 100kHz. In the ac mode, you can make phase-continuous frequency changes "on-the-fly." All ac waveforms are synthesized and have 0.001-Hz resolution and 50-ppm frequency accuracy. Ninety-day amplitude accuracy for sine, ramp, and Arb is 0.29% of output + 0.36% of range. Arbitrary Waveform Arbitrary waveform operation at a full 1-MHz bandwidth. This is accomplished by a sampling technique in which the values loaded into RAM are sampled at approximately 4.3 MHz and then run through a 1.25-MHz 5-pole low-pass filter. This allows full 1-MHz repetition rate while maintaining 0.001-Hz resolution at any frequency. You can also store multiple arrays that can be accessed for arbitrary waveform generation. Array depth is 2048 bytes. Second Channel Option The addition of a second channel allows you to generate two waveforms, either independent or phase-related to each other. The second channel output can be phase-synchronized to the first channel or to an external input. Such capabilities are especially useful if you are doing modern testing, tone-sequence generation, DTMF generation, FSK generation, or other operations where two outputs are required. Option 002 High-Voltage Output Option 002 is a precision voltage amplifier that increases the output voltage 10-fold. Maximum voltage is now ±100 volts, or 200 volts peak-to-peak in ac mode. The second channel slot is used for the high-voltage option. It is not possible to have both second channel and high-voltage options in the same instrument. System Operation The HP 3245A includes features that make it especially powerful in system applications. Because it contains many BASIC-like constructs, such as IF..THEN and FOR..NEXT, the HP 3245A can do much of the work that normally falls to the host computer. Now, sub-routines can be downloaded and run standalone, minimizing host interaction. Built-in math capabilities add to the power. Electronic calibration is both easy and accurate and does not require the instrument to be removed from a rack or opened to perform a calibration. All these features combine to make a universal source combining precision dc outputs, accurate ac waveforms, and arbitrary waveform capabilities in a single instrument. Looks and feels like a 3458A series meter and works excellent on the buss.